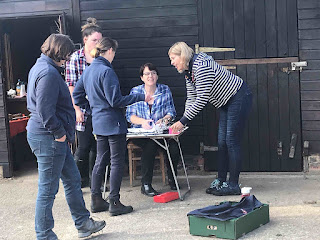 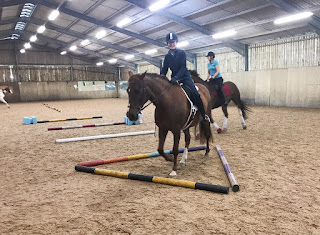 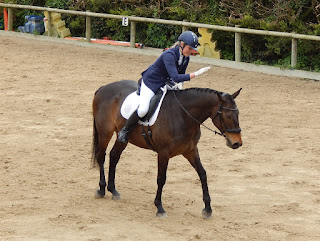 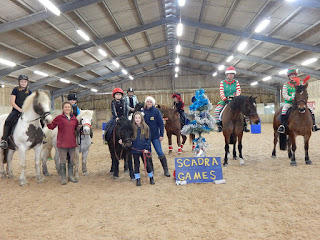 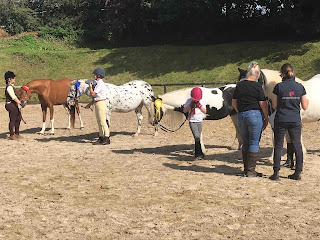 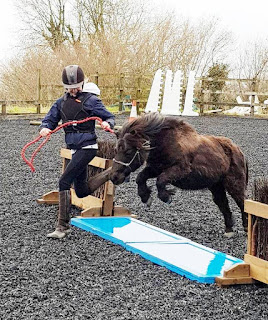 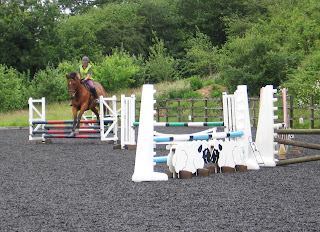 http://petalsownblog.blogspot.co.uk/
Posted by Petal at 15:16 No comments:

The vet came again and spent some time sawing at Hanuman's teeth and poking his stifle joint.  Then it was my turn and She said that I was going to have an injection that would stop my feet hurting, and before I know it, I'll be cantering around Celestial Pastures.  Hello, what's this?  mmmmm... carrots! yum
Posted by Petal at 11:27 No comments:

Hanuman went out for a hack on his own for the first time today, and returned with his rider still on board.  He was a bit tense but very courageous.  The proof is in the video snippet below, where he bravely moves over for a car and does manage to halt before climbing the hedgebank.

She is delighted with his progress.
Posted by Petal at 15:56 No comments:

Much to our irritation Hanuman and I have been shut out of the yard.  We were very frustrated that we couldn't go in for our customary nap, although Posy was there.  Later we realised that Posy wasn't there alone.  There was a new arrival! 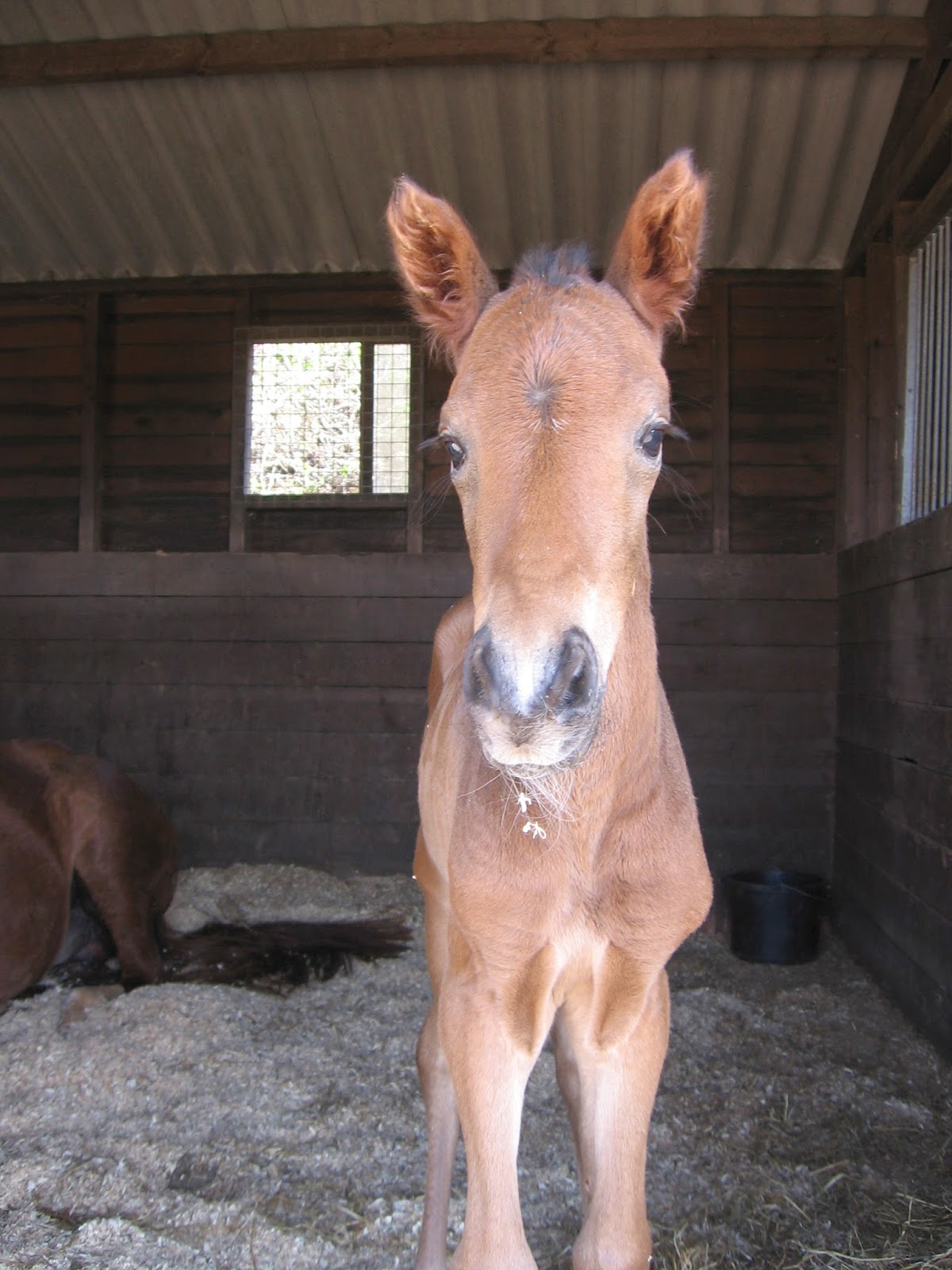 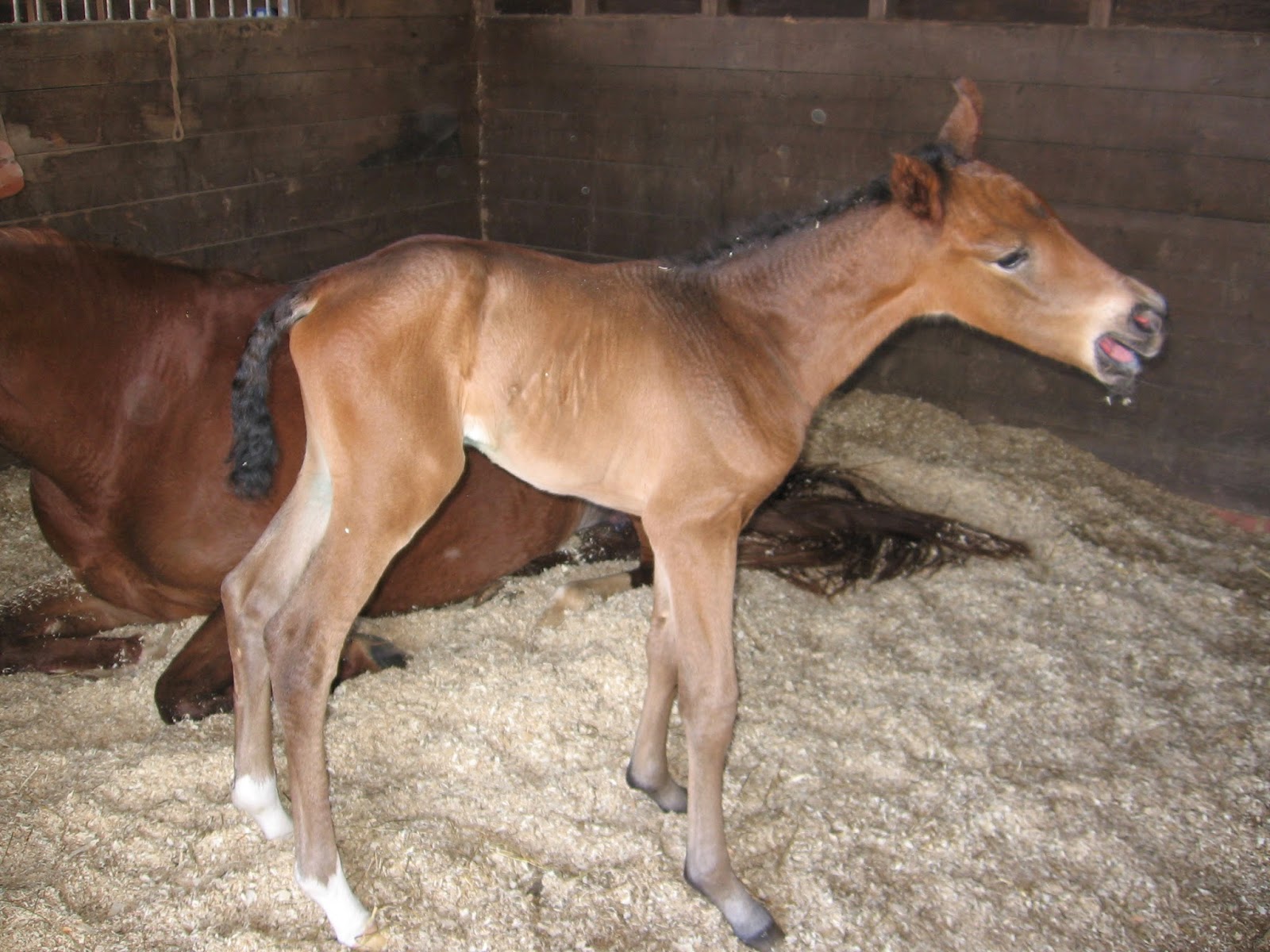 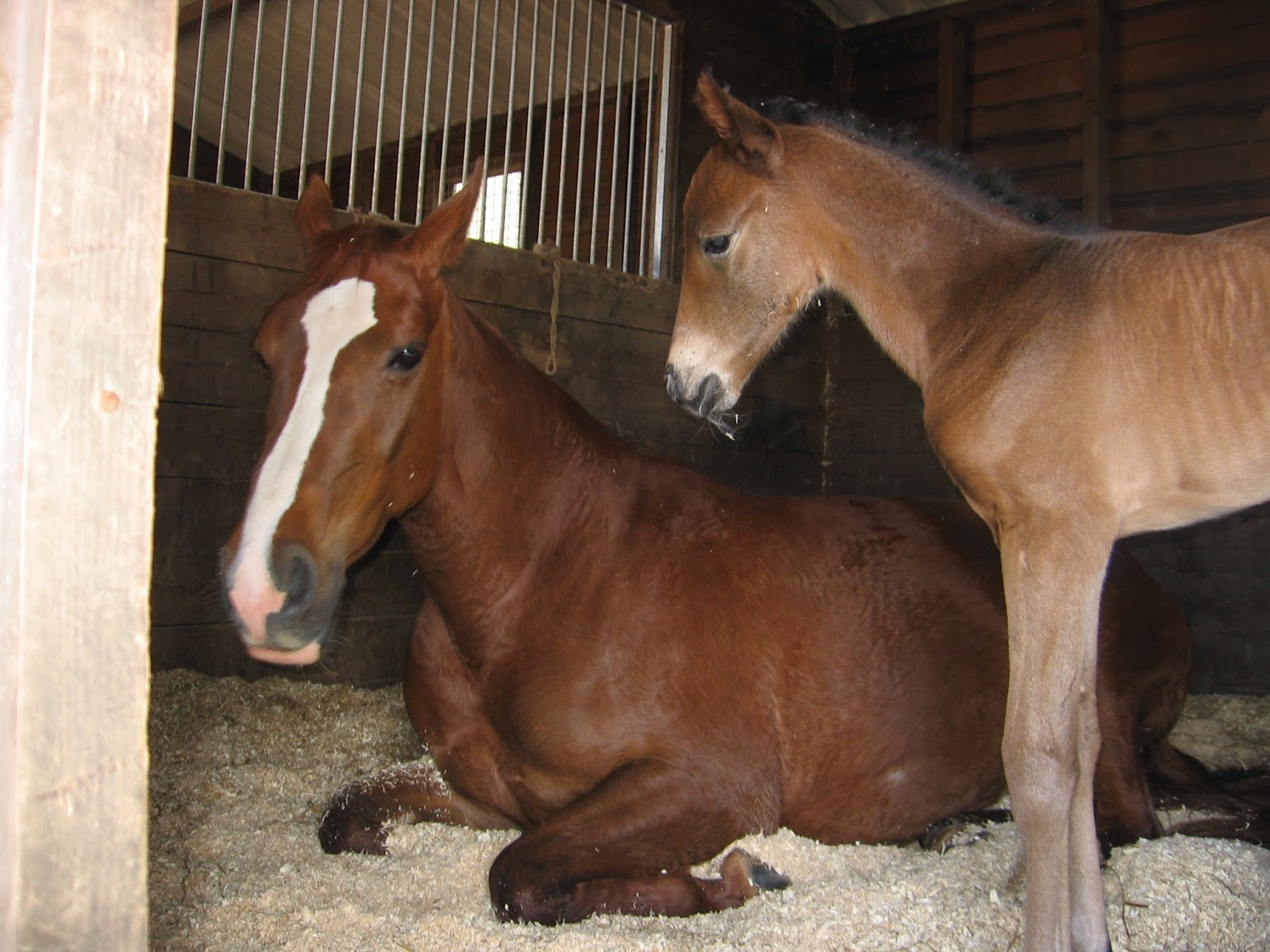 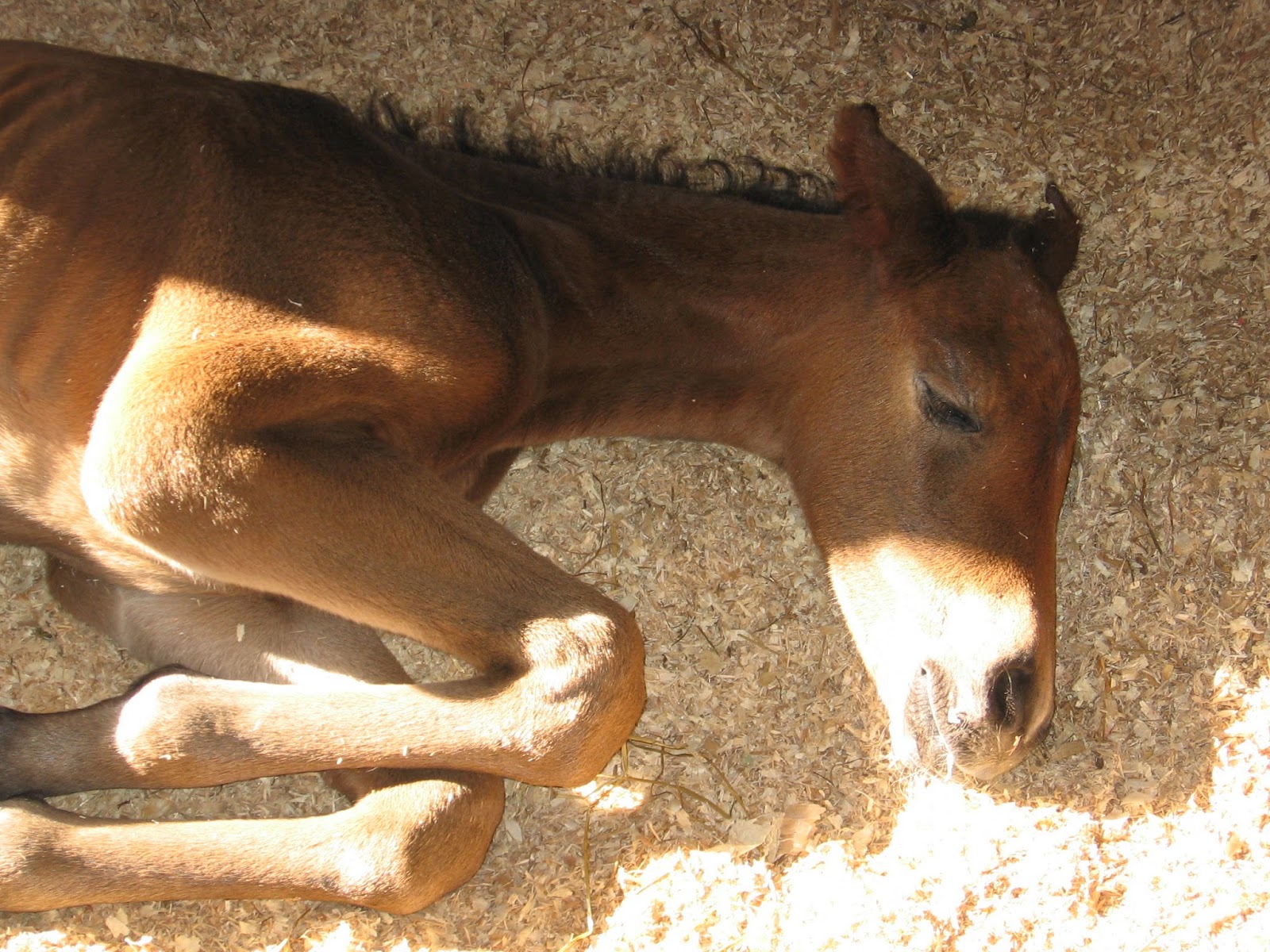 This made Hanuman very excited and he ran round and round neighing from the frustration of not being allowed to play with the new wobbly thing.  She claimed that this was making Posy anxious, and we were banished to the bottom field to keep us out of the way.  This enraged Hanuman so much that he jumped back out of the field again.  I am not the athlete I once was and I didn't join him, so She was able to recapture him and put him back in the bottom field once more.  Now we are trying to reconcile ourselves to a life of exile while Posy gets some relaxation.
Posted by Petal at 22:33 No comments:

The riding club held a working equitation party at our place.  Hanuman and Posy were onlookers but I was invited to take part.

There was one mystery manoeuvre involving a pole which had me flummoxed.  She said it was a side pass that we had successfully practised for a couple of days beforehand, but I have no recollection of any such thing.  My efforts to untie with rope gate with my teeth didn't prove as helpful as I'd hoped, but otherwise, everyone was agreed that I did very well indeed.

The second section was the timed Speed section, so I hurtled round and did a canter weave round the cones of such brilliance that I got a round of applause, which encouraged me to go faster and I did a gigantic leap over the jump.  The only thing that held me up was the mystery manoeuvre, the likes of which I have never done before.

Then there was a prize giving and I had to line up for a ribbon (third) and look responsible and set a good example to Boss, the ex-steeplechaser, who was piaffing at the end of the line.  I got some carrots and She got a chocolate Easter bunny, so everyone was happy.
Posted by Petal at 22:27 No comments:

Today, the remains of Richard III have been taken to Leicester cathedral for reburial - a victory for the city of Leicester after a challenge from rival city York; resolved in the High Court fortunately, and not on the battlefield.  As ever, moments of historical significance require horses - and my relations were in evidence throughout.

The chargers stood guard outside the cathedral... 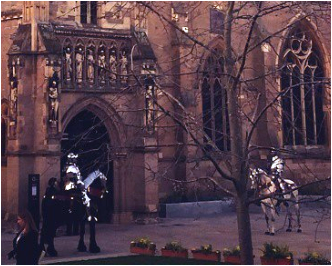 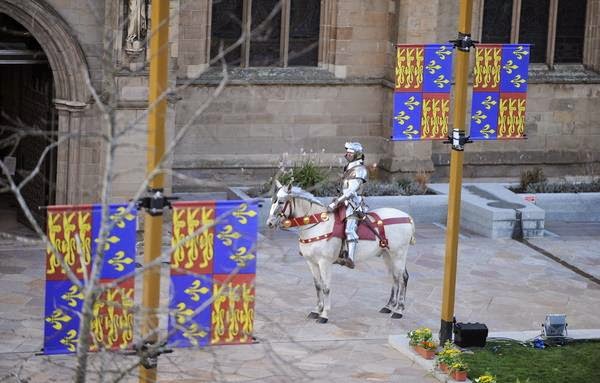 These are clearly my relatives, notice how steady they are and have absorbed the gravity of the whole situation.  Posy's relatives would have shied at people throwing white roses and would have been prancing and standing on their hind legs and making a spectacle of themselves outside the cathedral.
The marvel of this whole thing is that the discovery of his remains were due to a woman with a romantic obsession with Richard III who had a goose bump moment and had convinced herself that his remains lay in a car park under the letter 'R' in 'PARKING'.  Whilst clearly barking mad, she persuaded Leicester University to excavate there and to worldwide incredulity - she was right!  You couldn't make it up.
In a bizarre twist to the whole affair, Richard III is sending tweets from inside his coffin...
Posted by Petal at 22:01 No comments:

Petal
I was born on 15th April 2015. My mum is Posy and my dad is Cyden Cadans. I want to be a ballerina when I grow up.